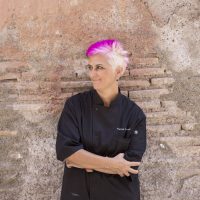 Cristina Bowerman, one of the few Italian women chef awarded a Michelin star and other prestigious awards, was born in Italy in Cerignola, in the province of Foggia (Apulia).

After graduating in Law in 1992 she left Puglia for the United States, to San Francisco. In California she alternated forensic studies and graphic design to working at Higher Grounds, a coffee house in San Francisco where she developed her passion for cooking, that she had always
cultivated largely due to her mother’s and grandmother’s teachings.

In 1998 she moved to Austin, where she earned a degree in Culinary Arts. There – in particular thanks to the experience at the Driskill Grill – she developed discipline and technique, working a lot on sharpness, definition and concentration of flavors.

In 2004 she decided to come back to Italy. She gained an important first experience at the Convivio Troiani in Rome, before moving to Glass Hostaria, a restaurant that had been opened for one year at that time, in the heart of Trastevere, one of the most famous and touristic areas of Rome.

Glass has always been far from the fake imaginary of Trastevere and from its culinary offer. It is a space contemporary in the environment and innovative in its philosophy and gastronomic proposal.

Cristina Bowerman started to propose her highly original cuisine, resulting from the different experiences – personal and professional – she made abroad, from the many internships at leading restaurants around the world that she attended to acquire new knowledge, to learn and refine the techniques she took back to Rome and reworked with her own twist. She managed to conquer a wide audience of locals and internationals with her kitchen, sometimes provocative and unsettling, but always recognizable and tasty, able to communicate – in an interesting mix – global and local, modernity and tradition.

In November 2012, after a radical renovation of a former Alfa Romeo factory in the Prati district of Rome, it was born Romeo Chef & Baker. Chef Bowerman curated the gastronomic proposal of this unique project: cooking and baking, a counter with a rich selection of excellent products, gourmet sandwiches and coffee… a radical versatility which tells of a creativity that is restless and free of preconceptions.

Afterwards, in 2013, the idea of two Ape Romeo was born to let the proposal of Romeo travel. It was among the first Italian examples of what it would soon become one of the top trends in the underground restaurant: the food truck. The project was extended in 2015 to Frigo, the van for the high quality ice cream by Cristina Bowerman, declined in a contemporary way, through the creation of original products such as the new cookie and the ice cream aperitivo.

In 2015 opened Romeo at Testaccio Market in Rome, a pop concept inspired by other international examples experienced by Cristina Bowerman. It is a simple stall in the most popular and busiest market, a place to buy freshly baked bread, meat, cheese, sandwiches but also the CUPS containing creams and soups, salads and fast gourmet meals to take away. Next to it there is also FRIGO to buy ice cream.

Cristina told her exciting story in a book published in 2014 by Mondadori: “From Cerignola to San Francisco and back – My countercurrent life as a chef”.

Beyond creativity and quality of her culinary inventions, Cristina Bowerman has an emblematic career as she managed to emerge in an environment – such as haute cuisine – extremely biased towards males. This value has been recognized at TEDxMilano Women, the Italian event organized – in the spirit of the Californian TED Prize – to tell and promote “ideas that deserve to be lived.”

In 2015 Cristina Bowerman is the only woman selected as Chef Ambassador at Expo Milano 2015, the initiative aimed at creating an international network of opinion leaders, ready to convey the principles linked to the World Expo Theme: Feeding the Planet, Energy for Life. In

November 2015 the Chef received the Prize ‘Aila Progetto Donna’ from Associazione Aila Italian Foundation for the Fight against Osteoarthritis and Osteoporosis. Among her most beloved commitments, in 2015 she was the star of the biggest ACTION AID campaign ever. She is also very committed in the organization of Fiorano For Kids, annual event to raise funds to research on the therapeutic role of specific diets in the treatment of epilepsy in children.

From March 2016, Cristina Bowerman is in the Food Act Committee, the act between Italian cuisine and the institutions, at Ministry of Agriculture Food and Forestry Policies.

In March 2016 she was awarded the prize “Identità nuove sfide” at Identità Golose 2016.

In June 2016 Cristina Bowerman is selected as President of the Association of Italian Ambassadors of Taste.

On December 2016 Cristina Bowerman participates in the opening of Assaggio bistrot by Autogrill (Terminal 3 – Fiumicino Airport area) offering a supervision on launching project, by signing the menu and food selection.