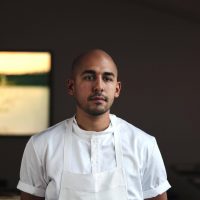 Daniel Hadida is an Ontario native and has cooked in some of Europe’s best kitchens before finding his way home.

Hadida previously worked for eight months at Le Châteaubriand and a year and a half at Septime in Paris, two of the city’s hottest restaurants and trendsetters in the move away from the stodgy fine dining palaces of Paris’s past.

Daniel met Eric Robertson when Eric was working at In de Wulf and they kept in contact, both being expat chefs over in Europe. After Daniel left Septime, he visited all the farmers that he worked with there, spending time on their farms – just working and learning.

Says Daniel: “It was great because I already knew the importance of small organic farming for restaurants, but getting to see it that way was an awakening experience. Then I came back to Canada, worked at Edulis for a little while, before going to South America thinking I would set up down there. I spent some time in Lima and Mexico City but didn’t really see what I wanted to see there. I came back here in December, 2015, and heard Pearl Morissette was just looking for someone to make lunch and cook a few dinners here and there. I figured I’d be here for a couple months and get back on my feet. It seemed like good relaxation.”

“In the end, I came up here and just meshed really well with setting up a garden and with this environment. It’s a very interesting place because if you have drive and you’re willing to put in effort, they basically just let you do your thing.”

When Eric came back to Canada, he visited Daniel and knew they were looking to set up something similar, something a little rural – a destination restaurant. Both chefs take pride in serving fresh, high quality ingredients from small-scale organic farms, and ultimately, Daniel said, “Hey, you wanna come do this together?”. The two chefs opened The Restaurant at Pearl Morissette in November 2017 in Jordan Station, Ontario.

Following rave reviews for an ever-changing multi-course menu inspired by seasonal French cooking, The Restaurant at Pearl Morissette was selected as the #1 new restaurant in Canada for 2018 by Air Canada’s enRoute Magazine.

Excerpt of interview by Charlie Friedmann, Special to The Globe and Mail