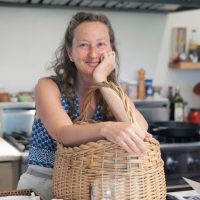 I am a journalist, author, editor, recipe developer, translator and teacher. A forager of sorts, I hunt for stories on everything from food, wine and restaurants to kitchens, travel and health.

I must be especially voluble about cheese, because in 2002 I was inducted into the master cheesemongers guild in France, the Confrerie de Saint-Uguzon. (Their medieval-looking medal comes decorated with a cow, a sheep, a goat and a shepherd. It is heavy; this must be what it feels like to wear a cowbell.)

I am the France correspondent and a contributing writer at Food & Wine, where I was previously a senior food editor for nine-plus years. My work has appeared in The New York Times, Saveur, the Wall Street Journal, Time Out New York, Everyday with Rachael Ray, Wine & Spirits, Fine Cooking, Australian Gourmet Traveller, The Statesman (Calcutta) and other publications.

I am also the author of a tribute to classic French provincial cooking, Backroad Bistros, Farmhouse Fare (Doubleday, 1994), and the travel cookbook Normandy Gastronomique (Abbeville Press, 1993) — there is even a French edition! As a cook, I developed the recipes for the gastronomic guide Hungry for France (Rizzoli, 2014). I am a co-author of A Table at Le Cirque (Rizzoli, 2012), the portrait of a high-society New York institution, and of Neue Cuisine (Rizzoli, 2011), a modern Austrian cookbook, with chef Kurt Gutenbrunner, who presides over a mini restaurant empire in New York.

For more information about all my books, click here.

I have worked in multiple publishing jobs. Before editing a magazine, I was an acquisitions editor in the cooking & gardening division of Macmillan USA. As a project editor at Rizzoli, I managed the translation, editing, design and production of the French pastry bible Patisserie, now in its seventh printing! My own translation of the 1,000-recipe compendium La Cuisine: Everyday French Home Cooking (Rizzoli) by TV personality and bestselling author Francoise Bernard was published in October 2010.

I have appeared on French television and on CNN to chat about cooking school vacations in France. I was a panelist at the International Association of Cooking Professionals annual conference in Santa Fe, New Mexico. New York University department of food studies invited me to talk about getting published (being an expert on something helps). I have been a judge too, reviewing exams at the French Culinary Institute and selecting winners at the Slow Food American artisanal cheese contest and at the Turks & Caicos Conch Festival. I traveled across the United States, scouting for Food & Wine annual Best New