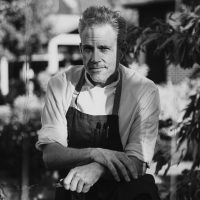 For more than two decades, Chef Jonathan Gushue has been satisfying palates with a natural culinary style and inventiveness that balances both tradition, locality and imagination.

Born in Newfoundland, Gushue received his culinary training with the Savoy Group in London, UK. He went on the continue his studies in France, United States and Japan over the next 5 years. Upon returning to Canada, Gushue joined The Wedgewood Hotel, Relais and Chateaux as the Executive Sous Chef in 2001 before moving on to the Four Seasons Hotel in Vancouver. Gushue’s talents were soon noticed and he was asked to join the famed Truffles Restaurant in Toronto as Head Chef. There he maintained its CAA/AAA Five Diamond status working under Executive Chef Lynn Crawford. His next move would prove to be a larger platform to showcase his incredible talents.

In November 2005, Gushue joined Cambridge country house hotel Langdon Hall Relais and Chateaux. Over the next eight years, he upheld the CAA Five Diamond award, became a Relais & Chateau Grand Chef, Tattinger Award of Excellence in cuisine 2008, Canadian Chef of the Year 2010 and bounced Langdon Hall on to the San Pellegrino list of best restaurants in the world in 2010.

Since leaving Langdon Hall in 2012 he formed Gushue Hospitality Inc with a focus on improving kitchen culture in Canada. The premise of the “modern kitchen” has been a large focus for Gushue in his role as a consultant, encouraging clients to think about where the industry is going to be as opposed to where it is. Some notable clients have been The Elora Mill Hotel and Spa and The Fogo Island Inn to name a few.

Gushue is also a man of rare kindness, charm and intelligence and has been a great mentor to many young cooks who have passed through his kitchen. In his spare time, he regularly lends his support to charitable organizations such as Hope House, Kids Ability and has been volunteering since 2013 in the kitchen at The Bridges, a Cambridge shelter that serves the homeless and others in need of a healthy meal.