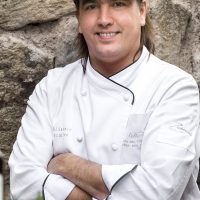 In the last restaurant, he was Executive Chef. During his stay in Spain, he won second place in the Cook of the Year competition, overlooked by Martín Berasategui (Three Star Michelin).

Over the past five years, he has judged the Arrayanes de Oro, one of the most important gastronomic competitions in Mendoza.

Over the last four years, he has been invited to participate in special events in important restaurants in Argentina, Peru, Paraguay, Japan, China, and Thailand.

As the head of the kitchen in the Casa del Visitante Restaurant, this establishment has received the following awards:

Chosen as one of the 20 best restaurants at a winery in the world, for the Canadian magazine “Wine Access”