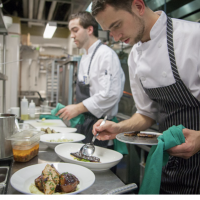 Richmond Station is a neighbourhood restaurant in Toronto that grew from a passion for those romantic neighbourhood spots where you could reliably grab a bite to eat once a month, two nights in a row or whenever the fridge was bare. A neighbourhood spot means the owners are around most days, the staff maintain their position for years and there’s too many familiar faces to really just “be in and out”. Your favourite items never leave the menu and if they do, the chef wants to make it for you all the same. https://richmondstation.ca/

“When I decided to be a chef, I made it a goal to pick the best culinary school in the country to build a solid foundation. I chose the Stratford Chefs School, mostly for its reputation for producing talent, for its intense training program, and for the intimate student – teacher ratio. I certainly wouldn’t be where I am in my career without the connections I made and the skills that I learned there.”

Born and raised in Thunder Bay, ON, Hayden’s appreciation for food and drink came naturally. Growing up hunting, fishing, foraging and feasting gave the 32-year-old Culinary Institute of Canada (CIC) graduate an appreciation for great food and hospitality.

At the age of 15, Hayden’s first foray into professional cooking came in the form of a dishwashing job. After graduating high school and while studying at CIC, Hayden seized an opportunity to work at Petraia Agritourismo (Tuscany, Italy) under chef and author Susan Mckenna Grant, combined with a stage at Machelleria Cecchinni, (Tuscany, Italy) under famed Italian butcher Dario Cecchinni. Upon his graduation, Hayden made it his goal to travel while cooking and so began work aboard the Antarctic expedition ship Akademik Ioffe. After his stint at the bottom of the world, Hayden spent time working at Treadwell Cuisine (Niagara Region), as well as stages at Bistro Vue (Melbourne, Australia), Blue Hill (New York, New York) and Parts and Labour (Toronto, Ontario). Hayden has been working with Richmond Station co-owners Carl Heinrich and Ryan Donovan (both graduates of Stratford Chefs School) since 2010 when the team was at Marben Restaurant.

Having won an episode of Chopped Canada in 2013, Hayden has also found competition quite rewarding. He placed runner-up at the inaugural San Pellegrino Young Chef competition and was a finalist for both the Hawksworth Scholarship and Food Network Canada’s Top Chef Canada.

Hayden’s technique driven and ingredient focused style of cooking has been influenced by the teachings of some of the most profiled farm-to-table chefs and authors. Success in cuisine is the combination of great relationships and great ingredients.