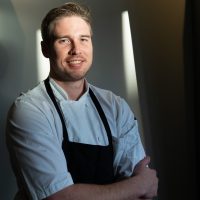 Chef Scott Roberts spent many years abroad while working his way through some of the best restaurants in England, Australia, San Francisco and Chicago. His combination of western technique and eastern flavours reflects his training at Chicago’s L2O, a 3 Michelin starred modern seafood restaurant, his travels to Japan and Russia, and his upbringing in Markham, Ontario, home to one of Canada’s largest Asian communities.

Scott’s cuisine combines carefully sourced meats, seafood and vegetables, with delicate accents from wood and smoke, a style he fell in love with while cooking at San Francisco’s 3 Michelin starred Saison, and England’s Fera at Claridge’s.

Upon returning to Canada, Scott started a catering company that services exclusive clients in Toronto and the GTA, Muskoka, the Blue Mountains, the United States and the Caribbean. Scott also taught at Stratford Chefs School as a Lab Instructor for several years.

The Restaurant Lab component – the Stratford Chefs School dinners and lunches – is a practical cookery exercise in which the student continues to develop basic culinary skills. In addition, the student has the opportunity…