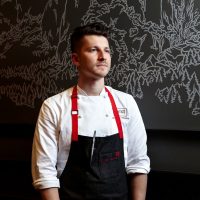 Jenner grew up in the southern suburbs of Chicago; at 14, he began his professional culinary career as a cook and dishwasher at a local restaurant. He went on to attend Johnson & Wales in Providence, Rhode Island, graduating with degrees in both Culinary Arts and Food Service Management.

After graduation, Jenner worked in Hilton Head, South Carolina before returning to Chicago to explore the fine dining scene. He eventually found his way, working as a tournant at mk The Restaurant under chefs Michael Kornick and Erick Williams. After two years at mk, Jenner left to join the team at Next Restaurant, where he was quickly promoted to Sous Chef and then Chef de Cuisine in May 2015. Jenner’s dedication, creativity and drive in the kitchen soon led him to be promoted, once again; in April 2016 he was named Executive Chef of Next, reporting directly to Chef Grant Achatz.

As Executive Chef, Jenner is responsible for the re-conceptualization of the restaurant four times annually, where everything from the cuisine, plate-ware, and service is reimagined. Due to its ever-changing nature, Jenner’s culinary exposure and influence is boundless, lending to his technique and creativity.