Earlier this month, during one of the coldest weeks of this winter, students at the Stratford Chefs School were lucky enough to experience some Italian warmth thanks to a visit from Chef Gino Minacapilli. He was here as our second and final International Guest Chef in Residence for this year. He is a chef and teacher at a school of hospitality in the region of Piedmont, an area of Italy renowned for the production of Barolo and Barbaresco wines, truffles and many other Italian delicacies.

I had the good fortune to spend 2 evenings working in the kitchen with him. For one of those evenings I was student chef, my last time at the school before we graduate.

Our initial meeting was over a dinner at Pazzo, attended by some faculty and students. At dinner he expressed a desire to eat something that was typically Canadian for his first meal here. The recommendation? Ribs, which, after finishing, he proclaimed to be ‘molto bene’, or ‘very good’. This was followed by a discussion of Canadian wine, which he had no knowledge of apart from ice wine. We all assured him there were some very good Canadian wines out there and I promised to deliver him a bottle sometime during his stay.

The next day all of the second year students met with him at The Prune to go over the menus for the week and to get to know him a bit. Ignoring his jet lag, he managed to excite all of us about the menus for the upcoming week. Over the course of the week, he managed to teach us about the regional specialities of which he is so very proud. The food he wanted to prepare wasn’t the Italian food we are all used to. Piedmontese food is mountain food, and being a land-locked region, it relies heavily on game, vegetables and grains, with little tomato and garlic. It is strong, hearty, home food, and many of the recipes he gave us during the week were from his family. While we were making Tajarin, a linguine like pasta that is a regional speciality, he explained to me the way his mother and grandmother had made pasta every day from scratch, just like we were doing.

My experience working as student chef under him was very positive. He is a natural teacher, patient and willing to explain things many times to get his point across. Differences in language were not an issue, and by the end of the week we were joking and laughing with him and he understood most of what we were all saying to him and vice versa.

The entire class was very lucky to have the experience of working with this chef, one who values new experiences as much as he treasures time-honoured classics, and brought Italian warmth to a Stratford winter.

On the night I was student chef, as I had promised, I gave him a bottle of Canadian red wine, which I hope he took home and enjoyed. Who knows, maybe he’s in Italy right now extolling the virtues of great Canadian wines over Italian Barolo…you never know. 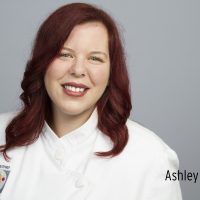 “Since graduating and spending a lot of time with folks who didn’t go to SCS, I realise the incredible breadth of this education. Being exposed to so many different menus, techniques and disciplines has been incredibly valuable in the workplace. I have a confidence and cultivated instinct to effectively problem solve; and the knowledge not just to understand how to do something but *why*. I can’t wait to learn more and more, armed with this amazing foundation, provided by SCS.”