Chef Gabrielle Hamilton came to the Stratford Chefs School for two weeks this January as the Joseph Hoare Gastronomic Writer in Residence and International Guest Chef. Students in both levels got to interact with her, learn from her and cook with her. There is a natural ease in how she speaks, both in her writing and to the people around her. As a student, this made everything I learned from her very clear and simple.

For her final dinner lab at SCS, I was lucky enough to be the Student Chef. In anticipation of this dinner, I read her cookbook Prune, which contains recipes from her New York City restaurant of that name. The book was given to me and a few of my classmates as a ‘thank you’ for helping out at Richmond Station (no really, thank YOU!) where Gabrielle, Chef Carl Heinrich, his team and alumni of the School created a collaborative dinner.

While reading, I got an immediate sense of what she might be like in the kitchen, and as a leader. For anyone who has worked in a professional kitchen, this cookbook will feel a lot like what you wish your workplace’s binder of master-recipes could have been. It is much more than a collection of standardized recipes converted for the home cook. Filled with notes and tips that feel really personal, it is almost conversational. Throughout, Gabrielle emphasizes particularities of a dish that require special care, ideas about how to stretch and improve a meal, imperatives on necessary consistency for desirability and deliciousness, and how to execute the service just right.

For her dinners in Stratford, Gabrielle created menus from the recipes in her cookbook. It was sweet of her to use and share her book so personally. All the students, and anyone who came to those dinners, can refer back to the book and recreate something like the dinner they enjoyed.

On her last day of a two-week stretch with us, Gabrielle Hamilton wanted to cook food that felt right for a Sunday. A luscious roast of veal breast, an aperitif, wines, and oozy wheels of Epoisses cheese to share at big communal tables. All of the food was cooked simply.

In a meeting before we started preparing this meal, Gabrielle set the tone for the food, describing how ‘real’ the potatoes were to be. We were not going to par-cook, quickly cool, wrap and store overnight, organize and portion, reheat, and serve the potatoes. We were going to nestle the potatoes alongside the roast in the juices and browned bits. Then we’d prop them up next to the carved meat on a big plate for sharing. No odd and innovative cuts, no last minute preparations.

We could have used many restaurant cooking techniques in preparing this meal; instead, we cooked in a way that was more ‘real’. We served grilled shrimp, in the shell, smothered and basted in anchovy butter. We could have used the grill in the kitchen, but Gabrielle loved the luxury of the wood-fire grill in the backyard of The Prune. No charcoal, no paper, just wood, hay, and heat.

A lot of what we cooked was slow, and for good reason. We aimed for tender and soft veal, wiggling away from the bone. We washed baby leeks over and over and braised them gently.  We brought the Epoisses cheese to the right temperature at its own pace.

Gabrielle had an impressive ability to read and understand each of the students right away. She and her partner Ashley adapted well to the Stratford Chefs School, while staying true to the style and deliberate affectation of Prune in New York – and bringing that to The (Old) Prune here in Stratford. I will blissfully continue learning from her, through her writing and her influence. 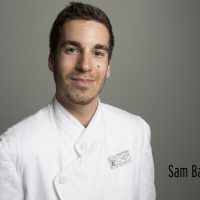 “During my time at SCS I was told by almost every instructor how staging or working abroad or even just outside of Ontario can benefit a young cook. For me, this theory proved true as I experienced things I never thought possible through 4 jobs/stages outside of Ontario. This is just one aspect in which I found the instructors at SCS really push the students to exit their comfort zones and strive to go further.”